There is something wonderfully serendipitous sometimes about how teaching plays out. Take, for example, a first year module on Caravaggio and his contemporaries in seventeenth-century Rome, and a raft of activities leading up to Chinese New Year celebrations at the University of Nottingham’s Lakeside Arts Centre.  At first glance, there might be little that these two have in common, but as it turns out, a workshop on Chinese brush painting is just the thing that was needed to explore the working methods and workshop organisation of seventeenth-century painters.

One of the themes the module on Caravaggio is exploring is concerned with questions about how artists work; in the case of Caravaggio, his famously mercurial peronality as well as the absence of large-scale fresco work seems to suggest that he worked largely on his own. This is in stark contrats to contemporaries such as Annibale Carracci whose extensive workshop was phenomenally efficient at taking on large-scale, monumental commissions such as the ceiling of the Farnese Palace with its intricate iconography telling of the Loves of the Gods in a multitude of frames. Many pairs of hands worked on thee images, yet the overall effect is of harmony and stylistic unity. Well, how is such stylistic unity achieved in reality? As the first-year students on the module found out, the key lies in the organisation of the workshop, and the way the master of the workshop teaches.

The artist who taught the students was Jiang Hongsheng (Jack), a renowned Ningbo painter and artist-in-residence at Lakeside Arts Centre between 12 January and 5 February 2016. Jack is an experienced teacher and specialises in teaching the principles of Chinese brushpainting to non-Chinese students, skills he has honed at his own Red Peony Academy in Ningbo. In other words, Jack teaches a group of individuals to paint in a homogenous style; this was exactly the kind of practical dimension to a discussion of workshop practices that was needed for the Caravaggio module.

Jack met us in his studio at Lakeside Arts Centre, and started the afternoon by demonstrating the techniques and subject matter he wanted the students to paint. This demonstration included instructions on how to hold the brush, how to layer and apply the paint, and how to paint a peony. The students had been provided with identical sets of materials and paper and under Jack’s careful guidance, with a bit of practice, they were soon able to produce images that copied Jack’s original. In fact, the results of this first stage in the workshop were stunning, but this was only the preparatory phase of the workshop.

With the students now using the same painting principles, Jack now charged them to be creative within set parameters. The brief was still to paint a flower but this time, the students could choose colour and species of flower, but instead of working on separate pieces of paper, they all contributed individual flowers to a collective, 100-foot long scroll. 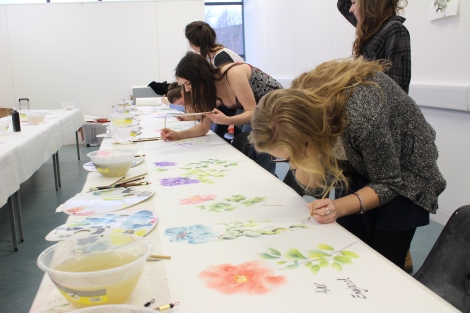 The resulting work was both homogenous and varied, and while maybe not quite of the quality of Carracci’s Farnese Ceiling, the work produced by 20 students over the course of an afternoon can definitely hold its own as a collective piece of flower painting. And none of these students will have any difficulties with discussing Baroque workshop practices for their assignments! The best way of learning is by doing it….

There is a bit of a coda to this story of learning outside the workshop, of course. None of this would have been possible at any University other than Nottingham with its sister campuses in China and Malaysia. These deep links provide a very special learning environment with distinctive opportunities for staff and student mobility, and for experiencing what it means to be part of a global university. The proof for this came in a rather unexpected manner: an article in the China Daily News !